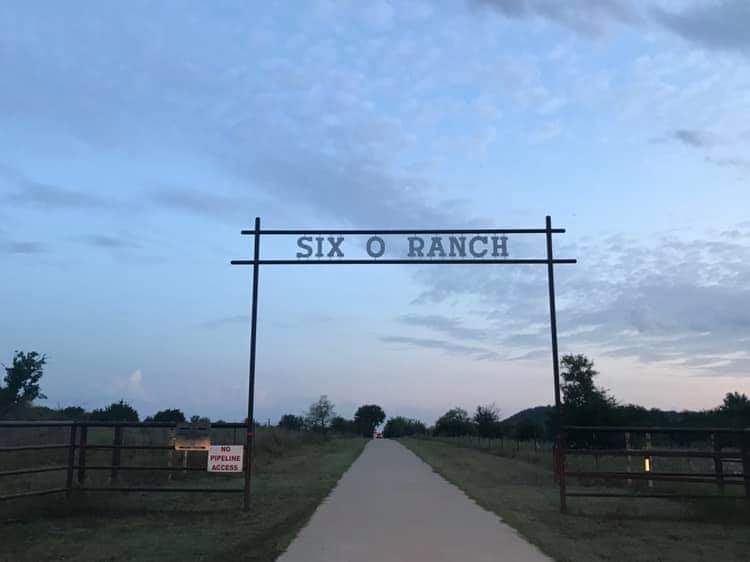 I had a time at this race.  Blaze Trail Running put on a great race.  The course was sneaky difficult but was set up with so many great views.  The loops with in the course intentionally went to bluffs overlooking the Texas hill country.  The volunteers were awesome and the parking set up is a detail that usually gets forgotten but it was great.  Plus grilling at the finish line.  Not many races have a person grilling hot dogs and hamburgers at the finish line, a nice touch.  The race was fairly local so a bunch of trail runners I run with during the week were there running or volunteering.

Parking right by the start/finish

The race itself caught me by surprise.  I did not think it would be relatively easy but it was hillier than I thought.  The race starting temperature was great but the humidity was in the upper 80s.  As the race went on the humidity dropped but the temperature rose.  You got to love running in Texas in August.  The location was at Six-0 Ranch in Cleburne, Tx which about 45 minutes southwest of the Fort Worth.  The ranch is beautiful and a great place for this race.  It is also a working ranch so cows were roaming around and leaving fresh patties.

The course was set up to go about 3.5 miles slightly downhill then 7 miles with  significant elevation gain and finishing with a 3 mile downhill run with a quick uphill at the end.  Within the first mile I heard yelling and looked back to see what all the commotion was about, a herd of cows were sprinting between a pack of runners and people were trying to get out of the way.  No one got hurt but those cows were moving very fast and way too close for comfort.  About 4.5 miles in we got to the lake, the first of many scenic areas.  We looped the lake which prior to running here I thought was odd but I understood why they made the course this way. 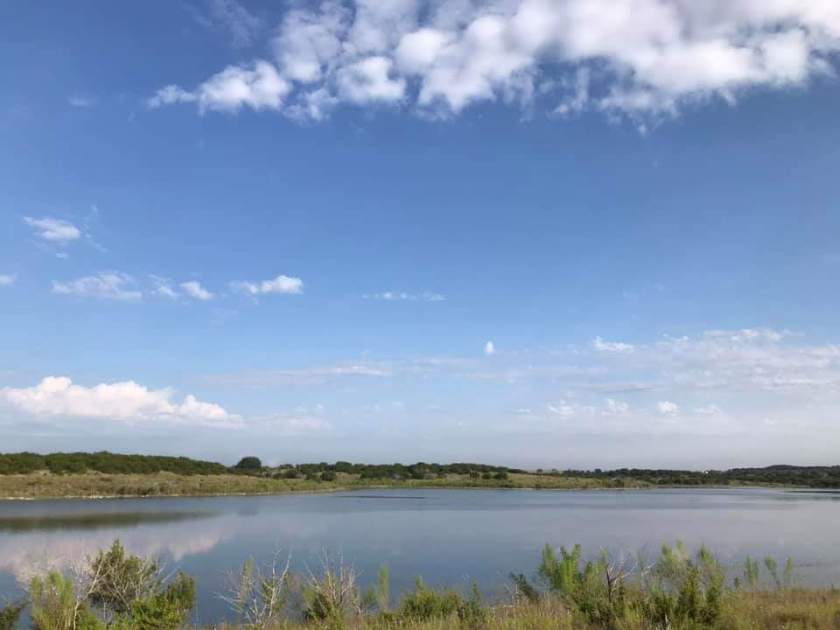 The lake on one side 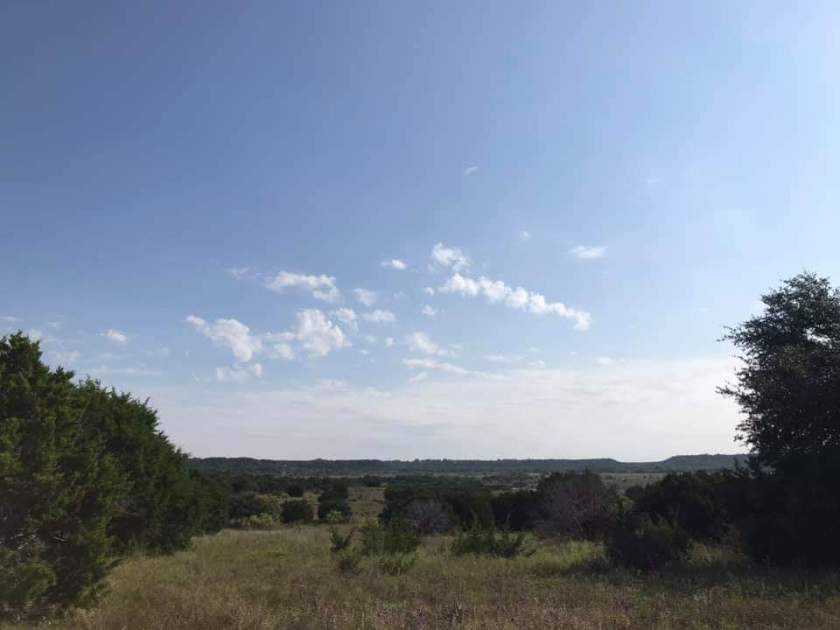 This view on the other side

Seven miles in I was drenched.  Not normal drenched but shoes and socks puddles drenched.   I was properly hydrated but I was hungry but not hungry.  It is hard to explain but I was so hungry but I did not want to eat.  It is a problem I have running when I am going longer distances.  I have to force myself to eat during these runs or hit a wall near the end due to lack of nutrition.   I make it to the aid station at 9.5 miles and refilled my drink and just get some watermelon, big mistake.  This was another place on the course where there was an awkward place to put a loop.  But the view added by having the loop was worth it.

One of my favorite views from the course

After the aid station there was still a but of hill climbing to do.  The downhill started fast and furious as did my demise.  I was holding a 12:20 mile pace until this point.  I ran into the wall and my pace jumped up.  I ended with an average above 14 minutes per mile.  Unlike last race I somewhat expected this to happen at sometime.  I have been losing weight and not taking in as many calories as I need for a race this long.  My finishing time of 3:12:17 was a little disappointing but considering the course difficulty and am not that unhappy. 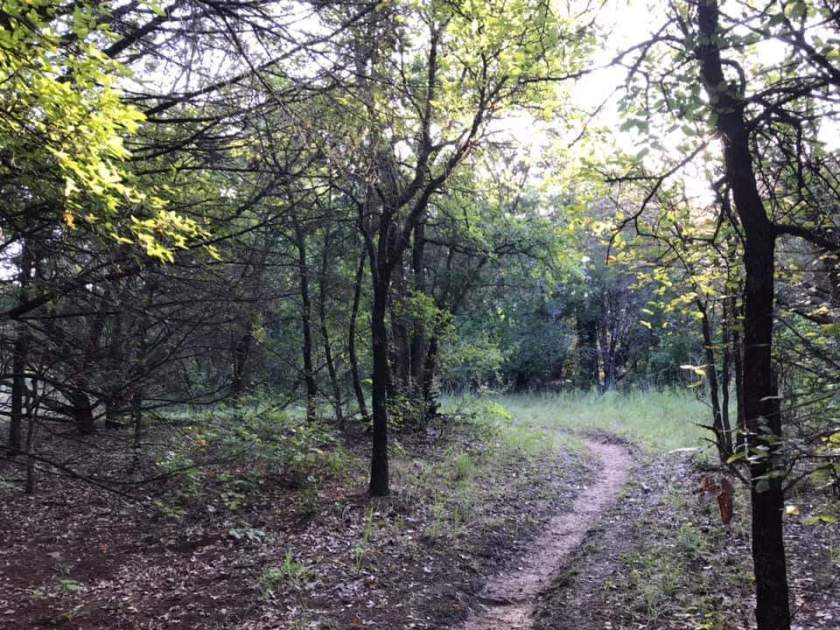 One of the few areas of tree cover 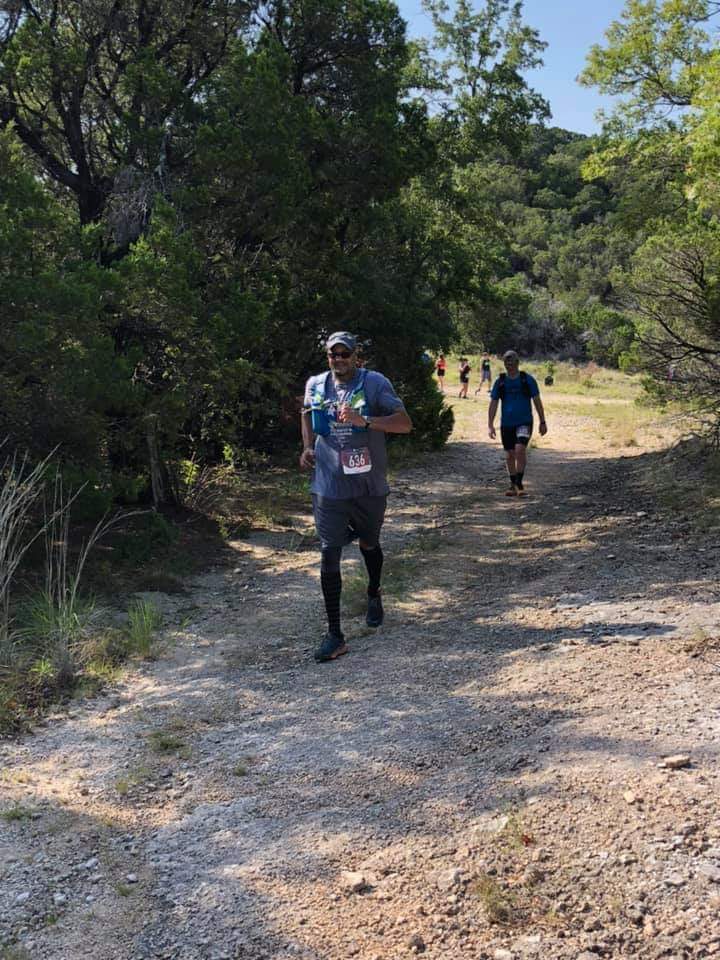 Struggling up the hill

I do not have many pictures of me having fun when running but the Dallas Dirt Runners caught me having fun and turned it into a meme.  My fellow runner is Sue Fee.

We were nowhere near the finish line at this point.

A good time was had by all and next week it is a 25K in Oklahoma.