The race was held at one of my favorite state parks, Tyler State Park. The park is located in Tyler, TX which is about an hour and a half east of Dallas. The 25K distance was a new long distance for me. This year I have run a half marathon, two accidental 15Ks and an accidental 20K. Plus a 12 mile training run. I still was not certain how I would do at this distance. The course was sneaky difficult. The hills were long and winding. They were not overly steep but went on for quite a bit of distance. The course held up well under extreme rainy conditions the night before and the morning of the race. There were a few muddy areas but not too bad. My pre race estimated time to finish was 3:30 but that changed after a two hour first loop. I thought 4:20 was a good possibility. I was still feeling good and not too tired. At the 3:13 mark, my legs completely quit. I thought I was moving fast but I could not go very fast. I struggled to finish and was doubting my ability to finish a true ultra race. The funny thing was my mind was lucid and I did not feel tired but my legs just gave in. My finishing time of 4:41 was not good at all but at least I finished. I looked at some of my past races in rain and mud. I did not fair well in any of them. The main problem with the 25K was my wet socks and feet. I did not bring a change of shoes or socks. Lesson learned. I ended up registering for the 50K in November. I learned a lot about running longer distances and will put it to good use. 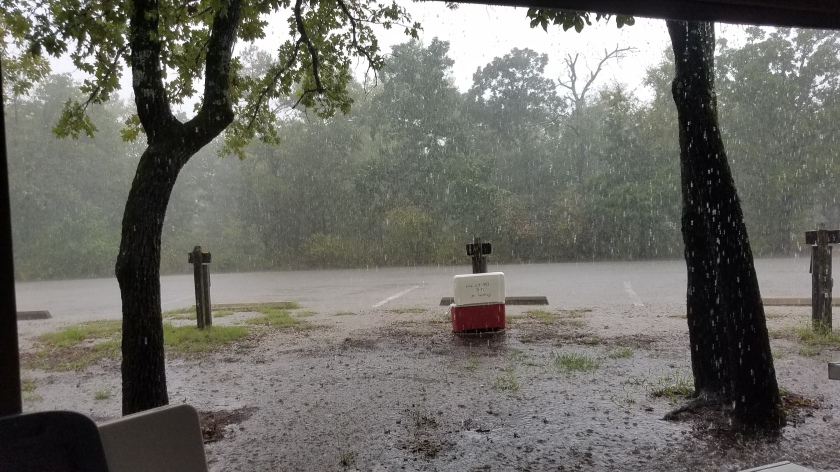 I have a week off of trail racing so I will get some hiking in in Oklahoma. After that I have seven weekend races each weekend until the 50K.