I had another great time in a Texas canyon. I did get caught out on the trail low on water. The temperature rose fairly quick and I had to backtrack on a trail that added an additional mile plus. The park is located about two hours southeast of Amarillo. Caprock Canyon State Park has a different look from Palo Duro Canyon and the Grand Canyon. Caprock Canyon does not have a flat top look around the rim of the canyon. The rim is more jagged and uneven than the other two. I was once again amazed at the vastness of the canyon. I would need several trips to the canyon to see half of what I want to see. I did not see any buffalo but I did not realize it. I did not see the natural bridge and I want to see it the next time I visit. I also did not get to walk the rim but that is something I will also need to work on. I hiked the Canyon Loop Trail and the Upper Canyon Trail at the North Prong part of the canyon. I was going to also hike the Haynes Ridge Overlook Trail but that is where my problems started. The trail was literally straight up which was not a problem. It also had a small rock hole opening to get to the rim. I am to big to try to squeeze through an opening that small. I had to backtrack and try the other side of the trail. It was also extremely steep and I was already running low on water. I decided I would have to try at a different time. I still loved seeing all the geologic rock formations. The reds were also deeper and darker that Palo Duro Canyon. I did get to see the Last Dance hoodoo which is a popular sight at the park. I was also fascinated by the white crystal bands in the red rocks. 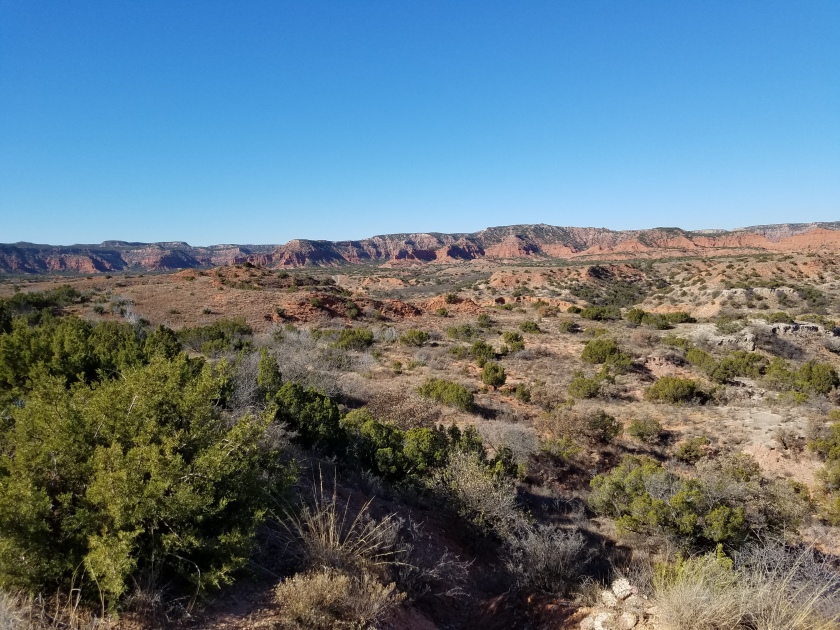 I cannot wait to get another chance to get back to this park. I will make the effort to see the natural bridge, the buffalo and get to the rim.